Nearly one month ago I got my Game Monster Tiles into the AppStore. I got really great feedback of friends and many said that the game was somewhat to easy but addictive. I didn't spend much time on developing it, it was more something like a test how it is to get a game into the AppStore.

Now four weeks later I have some interesting facts about sales, Game Center, Facebook ads and Jailbreak I'd like to share with you. First of all here is a graph with Sales, Game Center users and updates: 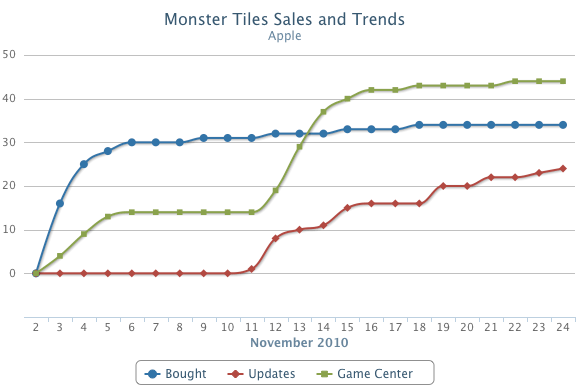 As you can see I sold the most licenses in the first two days and 70% updated to version 1.1 after two weeks, looks good so far.

The weekend between the 13th and 14th I had a tiny 10 € advertising campaign on Facebook. I had 122451 impressions, 30 clicks and as you see on the graph zero sales during this two days, it was fucking pointless wasted money.

And then there is the green Game Center graph. In the beginning it grows just with the sales, about half of the people who bought the game activated Game Center, it was pretty cool to see my friends there and some people I never met, it was a nice additional feedback channel.

Then when the first update went thru, the Game Center user numbers exploded! I was really unsure about what had happened and hoped that Apples Sales and Trends tool was broken and just didn't show the wast amount of new sales. During four days it tripled and there were finally much more Game Center users with Monster Tiles installed then licenses I sold.

After googling for some of the usernames I found out what was happening, someone cracked it and uploaded it on apptrackr.org so you can install it without buying it on the AppStore.

I think you have to jailbreak your phone for that too. The thing is, I know that the ones who download it for free never would buy it anyway, even if it just costs $0.99 a ridiculously low price. But I was absolutely not aware that there were such amounts of users who would download and play cheep games for free.

If I'd extrapolate the numbers I have, then half of the people who installed the app activated Game Center, that was 13 people. Now there are 44 users in Game Center, this is more then three times as much.