I have my own Twitter client Twittia which I am using and sometimes working on. The first version was written in RubyCocoa but the code was a mess so I have rewritten the whole thing mostly in JavaScript.

Last weekend I found Tweet Marker which is a service where you can set and get your "last read" tweet for a given Twitter user and I decided to implement it, I even got a API-key, but when I had a look at the documentation I found out that it is too working with OAuth and I would have a hard time implementing it, mostly because I didn't understand it even enough to implement the normal Twitter-authentication in JavaScript and I really didn't want to write that too in Objective-C.

So today after work I decided that it was time to just fix it. And what do you say, after "just" 8 hours of work everything reasonable is now written in JavaScript and I was able to delete a external framework and a bunch of Objective-C files.

Now I am seriously thinking about porting Twittia to Linux and Windows because I only have to do a simple GUI and bind it to the JavaScript code and I'm done! All the difficult parts are written in JavaScript.

The new version is not out yet because I want to test it for some days on my own before i release it but it looks like this: 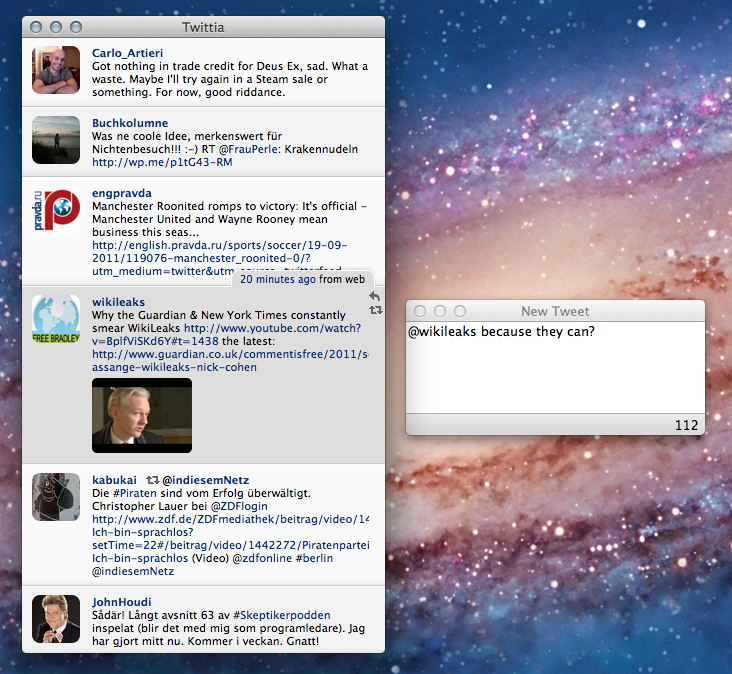