Can that possibly be healthy? 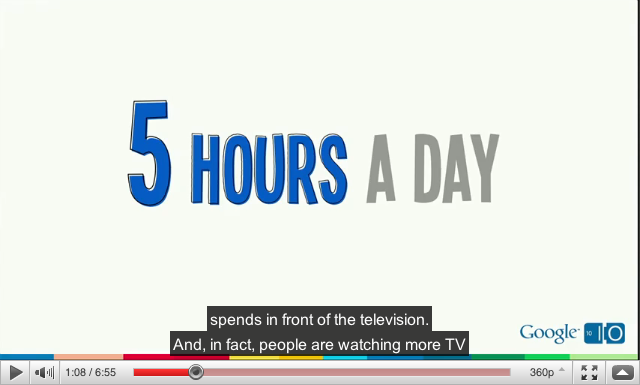 First interesting fact: Five hours per day. That's the average amount of time an American spends in front of the television. And, in fact, people are watching more TV now than they ever were in the past. That's pretty amazing.

Wait a minute, did he really say 5 hours a day? I doublechecked, and yes he did. But that could not possibly be the right number?! I had to check that and the first site about that I found was: The Sourcebook for Teaching Science - Television & Health and they say:

According to the A.C. Nielsen Co., the average American watches more than 4 hours of TV each day (or 28 hours/week, or 2 months of nonstop TV-watching per year). In a 65-year life, that person will have spent 9 years glued to the tube. Number of hours per day that TV is on in an average U.S. home: 6 hours, 47 minutes

Traditional TV usage in the U.S. remains at an all-time high at approximately 153 hrs a month.

OMFG! I mean, when do they do that? If I take a look at my day, I get up at 6 am, and am at the university at 8 am (80km commuting). I am there to 3 pm and am home at 5pm. Sometimes I visit my stepdaughter and get home at 7pm. Then I have work to do (earning money and so on) and work perhaps for 4 hours so it is 11pm. Now I finally have some time for TV and watch perhaps for one hour if there is something interesting, but this happens perhaps 3 times a week. OK sometimes I watch some series while working, but that is always a productivity killer so I try to avoid it.

I then had a look at other countries in the western world and was surprised too:

And the sick fact is that it is just raising, everywhere. I seem to live in a different world, nearly nobody I know talks about things they have seen on TV and a noteworthy number of my friends do not even own a TV. I didn't either for several years in the past and I am confident to say that I wouldn't miss it or buy a new one when this one would break.

How about you, how many hours a day do you watch TV? Are you under, at average or perhaps above?