In 2008 I bought an expensive TV because I wanted to watch the European Championship in football on a big screen in HD after being without a TV in 2006 where I listened to the radio while watching a telnet ASCII stream over the Internet. For various reasons still in 2014 I haven't been able to watch any major sports event in HD but that is a different story.

Anyway, TV:s in 2008 weren't that smart and I wanted to stream movies and TV series from my computer in the kitchen on the big screen in the living room, so in (afair) 2009 I bought the first version of the WD TV live, a media player box you put under your TV.

I was really surprised how well it worked, I was able to share my Movies folder via SMB on my iMac and it showed up on the WD TV Live and I was able to play basically everything, even mkv:s (the Matroska media container format). 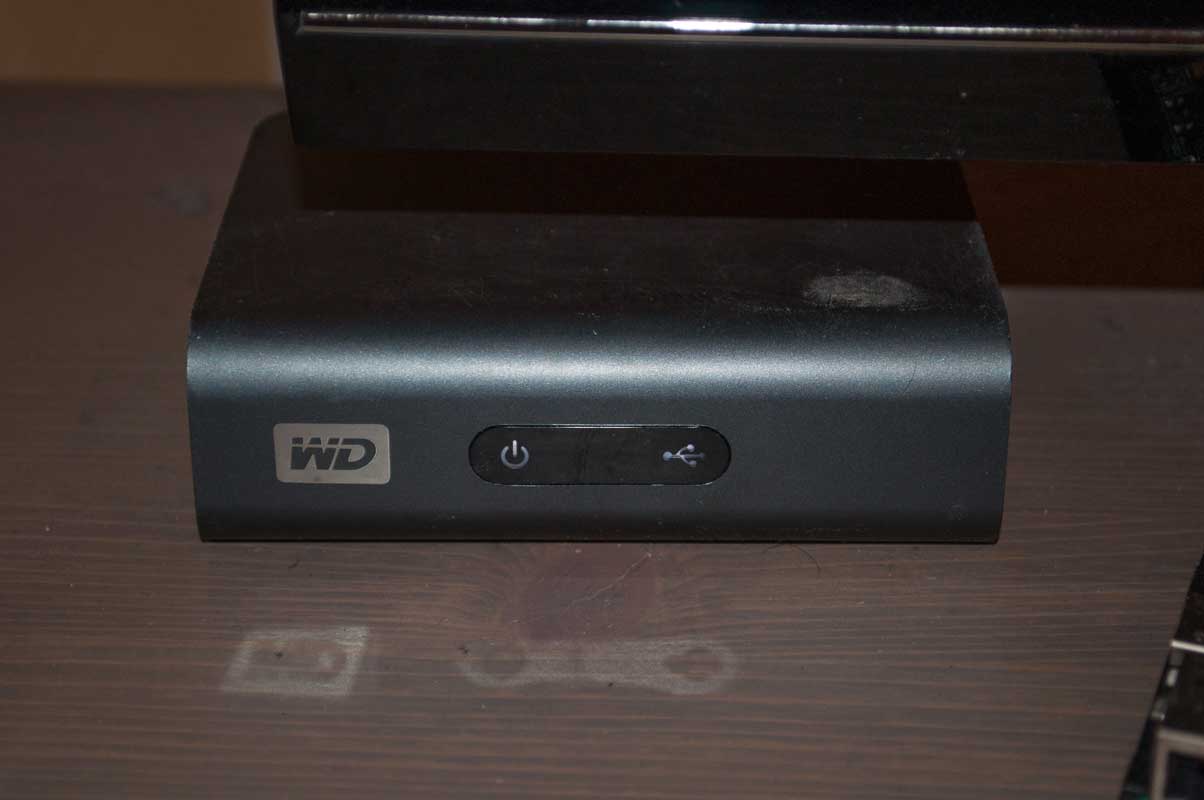 Then a year later I bought a used Dolby Surround system which I was able to hook up with help of a optical cable and it would play wonderful 6.1 sound while I watched Full HD video on the TV. Life was great!

But then suddenly Apple updated their operating system and with it their SMB implementation from the open source one to a closed source in house reimplementation and a version bump. Suddenly everything stopped working. My WD TV live wasn't able to talk to my iMac anymore and so everything, the TV, the WD TV live and the surround system everything was useless.

So back then the Raspberry Pi just came out and a media center for 35 €? I'm in! I bought one, installed Raspbmc (a special linux distribution with XBMC preinstalled) on it and bam! HD video via the HDMI output with the iMac hooked up via sshfs. At first it was really great, the Raspberry Pi had special hardware so it could render the HD video without problems, but after a couple of movies I got suspicious. Most of the movies with surround sound did not play in surround but as down mixed stereo. 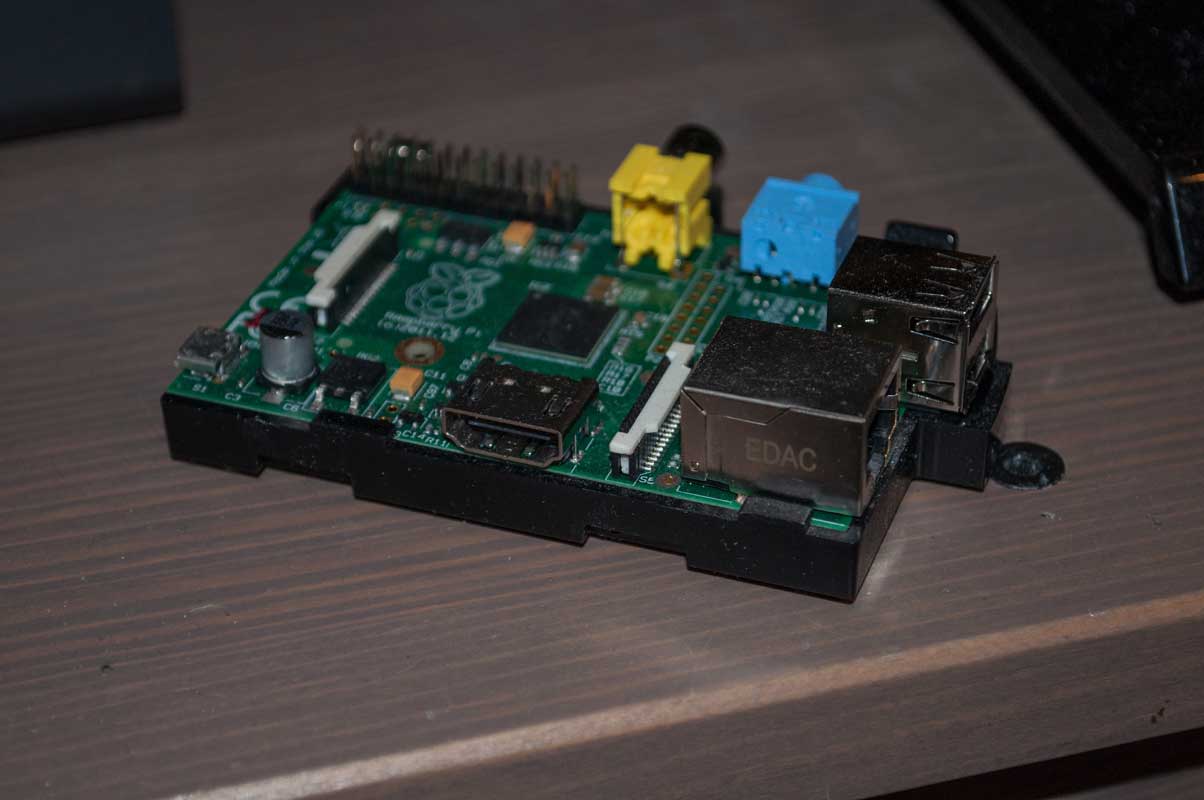 Turns out you need special hardware for decoding DTS sound and to get the price down they didn't include it, because most of the people who buy Pi:s never would need it anyway. But there was hope, there was the hardware in place to pass-through the DTS to the HDMI cable which then could be passed on to the surround system which had a DTS decoder built in. But as always life can't be that easy.

My TV, which I bought in 2008, was too old so they didn't implement pass-through audio and so afair my TV said to the raspberry Pi that it wasn't able to handle DTS so the Pi had to send the stereo signal, bummer. This was a dead end.

Because the WD TV live firmware was just a custom Linux distribution there of course were people hacking it. So I found b-rad's WDLXTV, where he opened up the firmware, added lots of new functionality and released the new distribution so you could flash it over your old WD TV live.

Now with a ssh daemon running on it I was able to use NFS to mount a directory on my iMac during the boot time of the WD TV live. There were some hiccups to it, for example I had to plug in a USB hard drive to the WD TV live so my NFS-mount would show up in the front end but yeah, whatever. This was great, I finally could watch HD movies with surround in my living room!

Then my big 1 TB hard drive on my iMac broke. So I obviously bought a SSD because they are so much faster. But they are quite expensive, so I only got one which is 256 GB big. It was obvious that I had to move my media library to the external hard drive, which is 1 TB big and was until then only used as a TimeMachine backup drive. The thing is, and if you used NFS before you probable know this, but I didn't, you can't use externally mounted hard drives via NFS, so sadly again no movies for me! 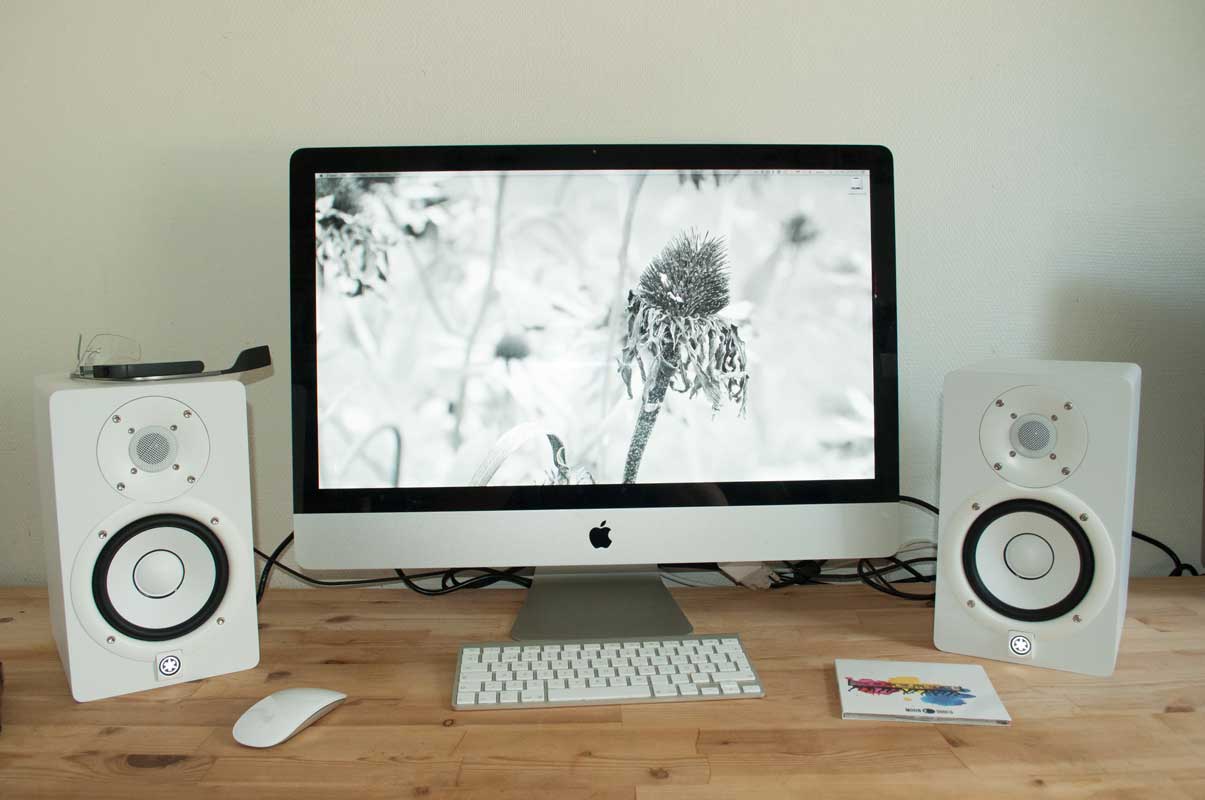 Then a couple of months ago light at the end of the tunnel! Google started selling their Chromecast in Sweden. Being only €37 I got it as soon as they were available. There was the problem that I only could play video from the web on it, either via the Android YouTube app or via Chrome on my iMac. This is where I found out about Plex Media Server which really early on already had a native Chromecast app. Everything looked really really great, I hooked up the Chromecast to my TV via HDMI and the optical audio output from the TV to my surround system and ... 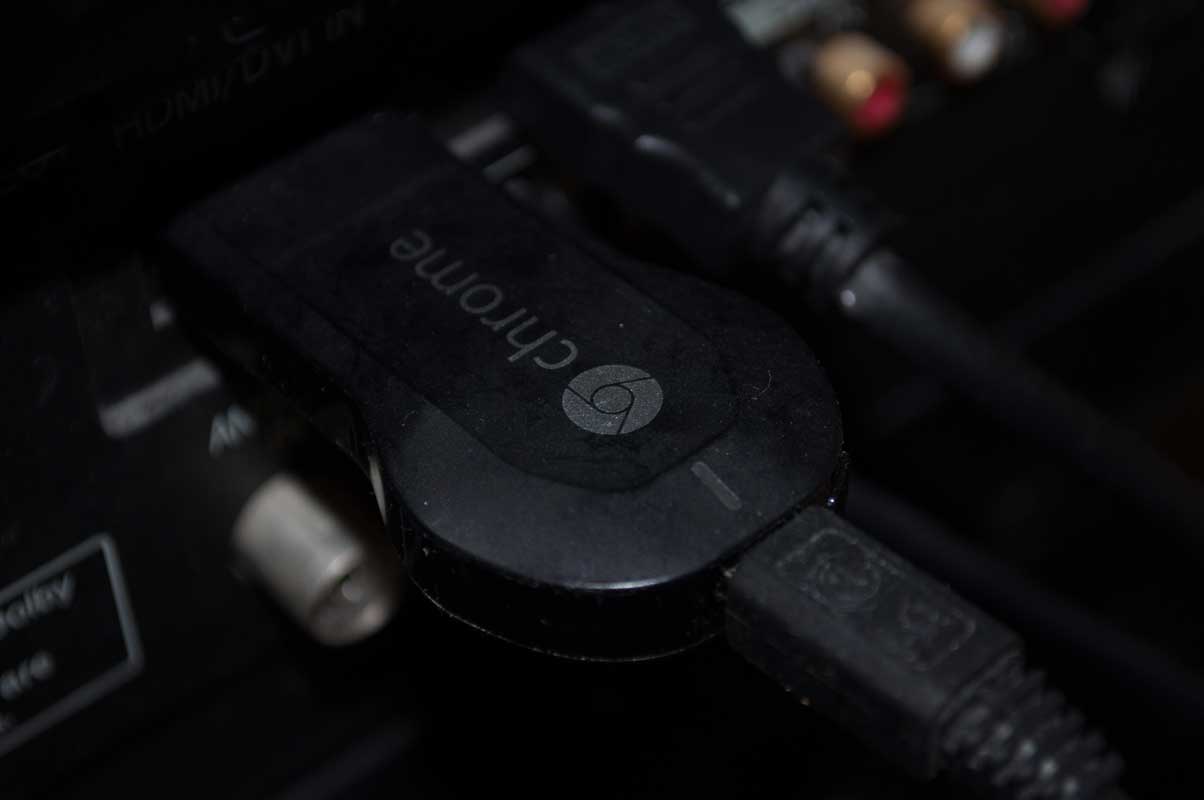 Sadly only stereo sound :(. I assume it is the same pass-through problem as I had with the Raspberry Pi on the HDMI cable connected to my TV, the TV is just too old.

Funny thing, I started to work on new stuff at work just a couple of days ago, I won't get into details but I had to read up about Rygel, a DLNA compatible Media Server for Linux. I had seen the acronym "DLNA" quite many times in combination with home networks and media but never knew what exactly it was or did. I remember trying it out with the PlayStation 3 but never getting it to show anything of interest.

Today after reading a bit in the book An Introduction to the DLNA Architecture: Network Technologies for Media Devices, which we had lying around at the office, I realized that DLNA is the thing which is supposed to do the stuff I want at home, to share videos, music and photos within the home network with automatic discovery of the servers, etc.

First thing at home I searched the internet for a DLNA compatible media server for my iMac. Little did I know that I had one installed and running already, Plex has a DLNA server built in. And because I used it to watch TV Shows and Movies with Chromecast and while on the go on my Android device, it already had indexed all my media.

Then I went to my old trusted WD TV live, it was a Linux box so I just assumed they have built in a DLNA client already. And I was right, my iMac showed up automatically under Media Servers and I was able to browse everything at least as fast as back then with SMB or NFS. Playing the videos with surround was not a problem either, it just worked because I still have the WD TV live hooked up to my surround system with an optical cable. 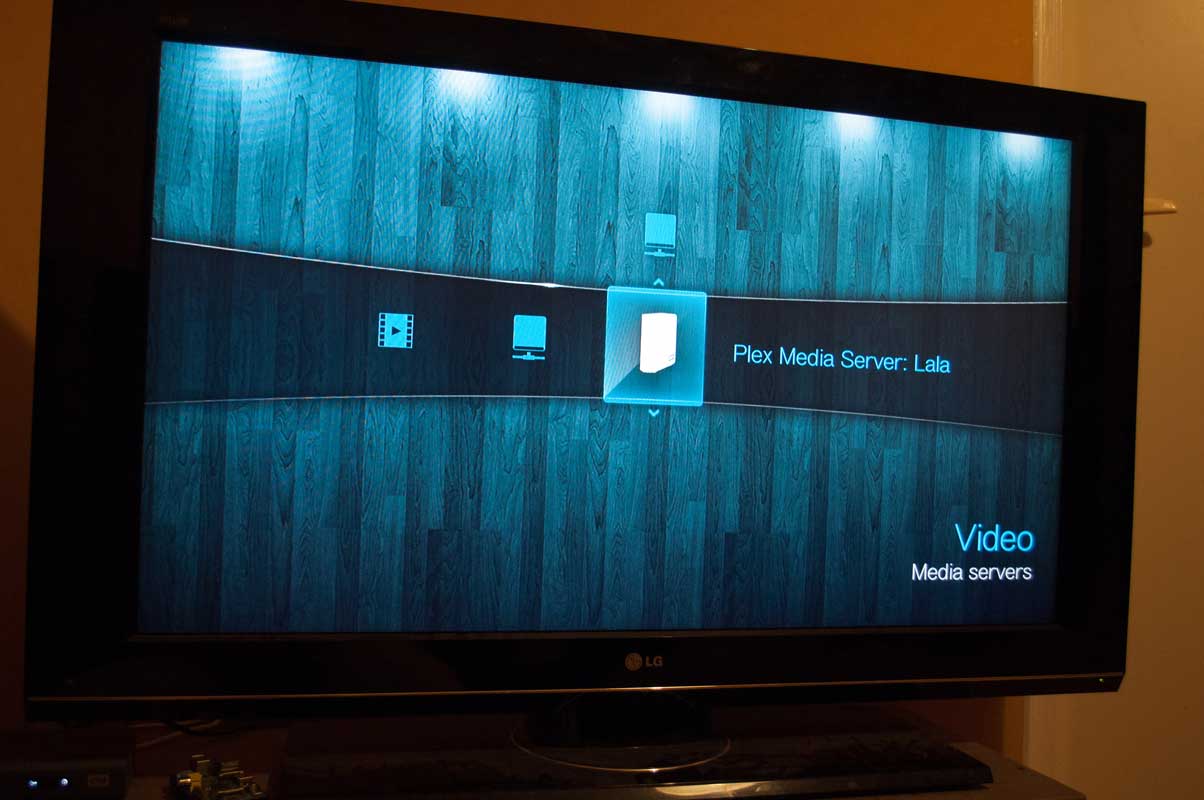 So for now I am really happy, my old stuff, everything is at least 6 years old works happily together so I can enjoy Full HD video with 6.1 sound in my living room, streaming from my iMac in the kitchen.

Nice! Im running plex at home (using the desktop client on a dedicated mac mini close to my TV) works flawlessly. Also a great iOS-app, which syncs my movies for offline viewing on the go! Also, works great when watching remotely - the transcoding thingy is great for giving me best possible streaming quality. Also set up so my brother has access to my library via plexbmc (running a openelec installation on a RPi) which was super simple to setup.