We need a way to syndicate notes.

I poked around a bit on a Notes-Reader for the IndieWeb. Notes are like blog posts but without a title and mostly very short. They are also mostly plain text with auto linked URLs and some people include the media which those links point to too. For me in the long run I would like it to replace Twitter. You can check out my implementation at: https://jeena.net/notes

My biggest problem yet with it is that there is no reader application for it, so you could consume other peoples notes, and perhaps even reply to them, etc. What you can do right now is to check every of those websites once a day or something and then reply to notes from your own website with help of webmentions. This is kind of what I do today but it is quite a lot of work and I wish there was a easier way to do it.

Most of the people who write Notes offer a RSS feed, so what I did was to subscribe to every one of them with my normal Feed reader. This kind of works but because Notes do not have a title, it looked really weird in my normal feed reader to see the content copied into the title for every note. It was just not a pretty sight: 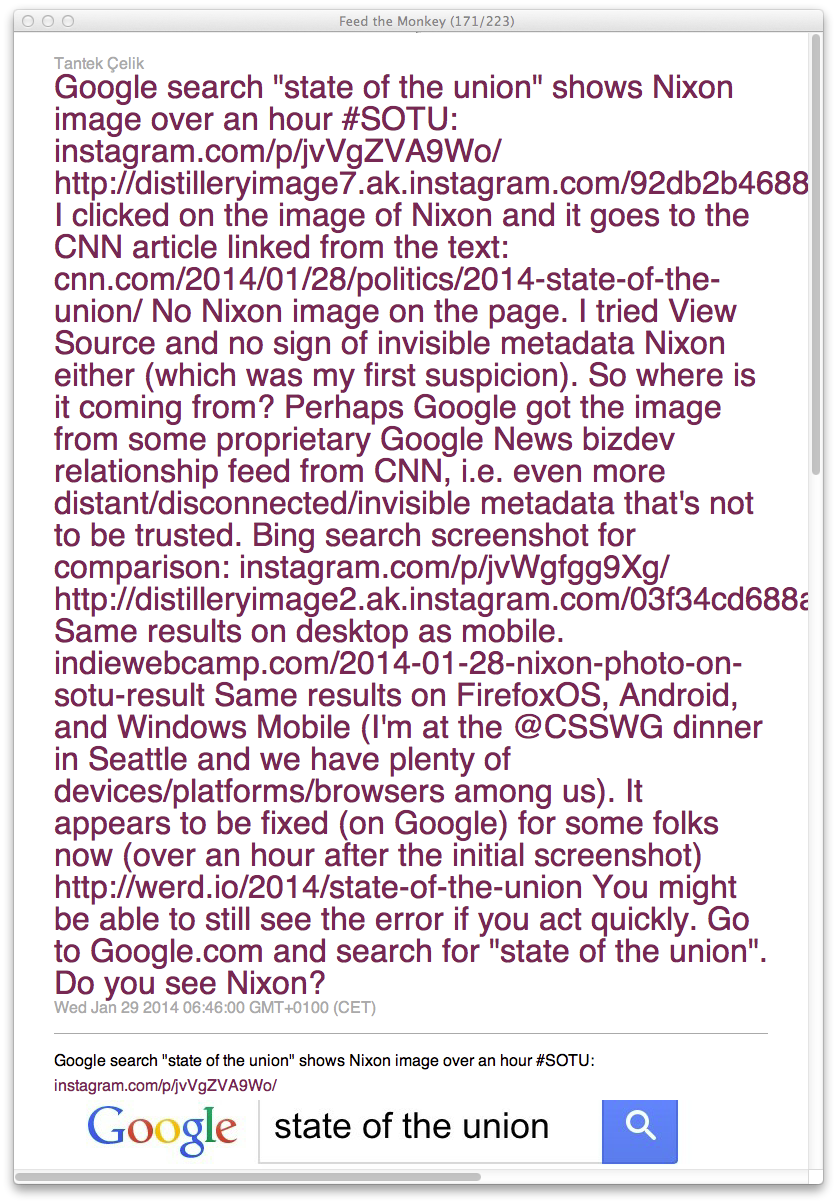 And then in list view, all of the feed readers I tested only showed one line of the title so you had to click on every title to see what people have been writing about, even if most of the text would be visible completely in 3-4 lines like on Twitter.

I was thinking about that problem for some time now and I was trying out some stuff today. I have a Feed reader which is written in JavaScript and works also offline (FeedMonkey). There is also a RSS Metadata sync-protocol Pond which I am helping to polish and a example implementation of a server (in Go) for it (I will write more about it in a separate blog post). Over the last couple of days I implemented some stuff so that FeedMonkey could use Pond as a backend.

I then subscribed to all the Notes-feeds I wanted to follow on my text installation of the Pond server and let it serve the JavaScript for FeedMonkey, which is kind of cool because that way I didn't need to set up another HTTP server just to be able to serve this code.

I tweaked my feed reader only slightly so it wouldn't show the titles but instead would show the content in the list view, I truncate it if it is really long, and if you click on it you come to the same post fully auto linked and in the future also with auto embedded media. Those couple of changes made it already a quite a cool application: 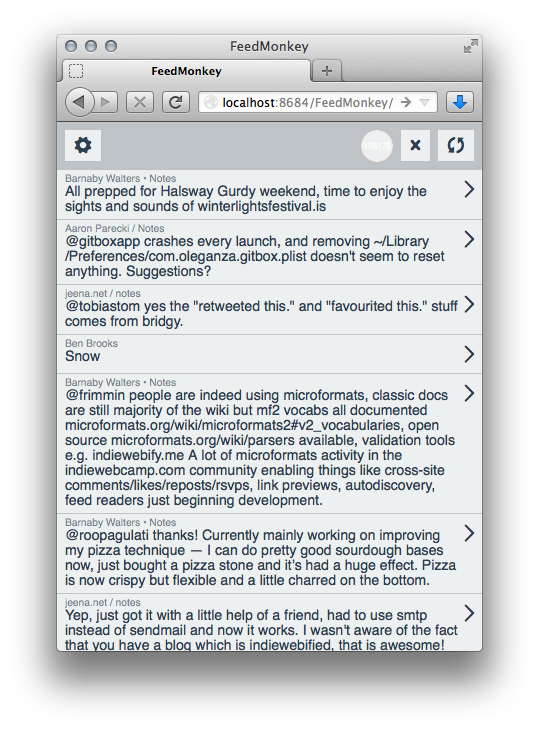 There is obviously a huge amout of work to do yet, and I'm not even sure I'm up for the task, but I kind of like where this could go in the future.

Let me just brainstorm here what I would like to have implemented here too:

I think it would be ok do to it like that for starters because we already have this infrastructure in place today, but what we actually would like to have is syndication via HTML and Microformats instead of RSS/Atom.

[update:] Just got a link to some former discussion about it: http://indiewebcamp.com/feed_reader

good post! glad to see more people thinking about this. and i appreciate that you started from feed readers instead of from scratch. they may not quite enough for notes, or IndieWeb in general, but they’re still a solid jumping-off point. btw, in the same vein as Bridgy, if you’re interested in ways to connect the silos to your reader, check out silo-to-RSS bridges like facebook-atom, twitter-atom, and InstaFeed.

My IndieWeb areas of interest

I am planning to attend the next Homebrew Website Club meeting in Portland, and have been thinking about IndieWeb areas in which I have...