We are all humans, descendants of african apes

This chart shows how the human distributed over the continents. Science shows that all of the homo sapiens who live today, which is about 6,872,200,000, are decedents of a group of about 1000 individuals of the Homo rhodesiensis (+ in little extent crossbreeding with the neanderthals) who decided to leave africa and try it somewhere else about 200,000 years ago. 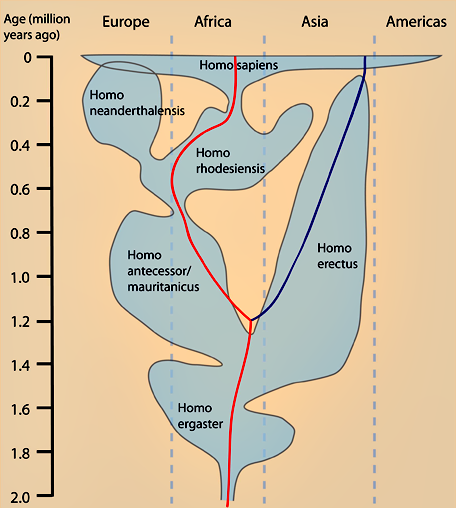 Fun fact, all people with blue eyes seem to be decedents of only one individual with a genetic defect which caused the eyes to stop produce melanin and turn from brown to blue.

Now here is a question, why the fuck would anyone think something like "Germany to the germans" which was btw. founded not earlier than 300 years ago. Or even more funny "We have to protect the swedish traditions like Christmas, and so on.". Christmas is a swedish tradition? WTF did he smoke? What about Yule?

It's like Carl Sagan wrote in his book "Demon Hunted World" (which you really should read):

I worry that, especially as the Millennium edges nearer, pseudoscience and superstition will seem year by year more tempting, the siren song of unreason more sonorous and attractive. Where have we heard it before? Whenever our ethnic or national prejudices are aroused, in times of scarcity, during challenges to national self-esteem or nerve, when we agonize about our diminished cosmic place and purpose, or when fanaticism is bubbling up around us—then, habits of thought familiar from ages past reach for the controls.

Ok, I understand that you could argue that I am not a really good example of a nationalist, until now I already lived in 3 different countries. I think therefore I have serious problems understanding what goes on in peoples minds who claim that some particular landscape should only belong to a specific group of people. Who gave it to them? Was it some kind of a god? Or did they just take it by force and killed everyone who lived there before?