I don't want to use it anymore

About three month ago I got a Nexus 5 from work, this is my first Android devise. Back in 2007 when the iPhone 3 came to Sweden I did stand in the line to get one, even during work hours. Then last year I got me a Alcatel One Touch Fire in Poland, with Firefox OS on it, which I have been using as my main phone for a year and now I am on Android.

Because it is my work phone and doesn't relate to me as a private person too much I thought I could try Google Now which is advertised as a help in life without the need of you adding data manually. But honestly, it does not do anything of value for me. Let me explain. 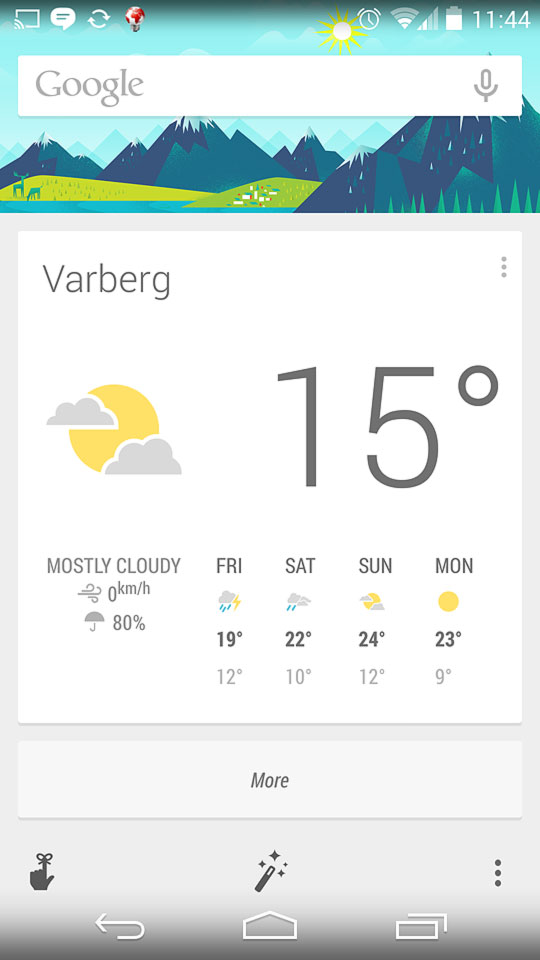 Basically this is what I see most of the time when I go to the Google Now view, the weather of where I am at the moment.

Sometimes I also see when the next trains go to work or back home. But I already know that information, it is every half an hour :37 and :08 from Varberg an :10 and :42 from Gothenburg. But what about if the train is late? Nope Google Now doesn't know anything about that. What about if the train doesn't go at all that time? Nope not a word about that either. What about if there is a labor strike for a week or longer? Not even then Google Now cares to update its information, it still shows me that my next train goes at :37.

Once or twice I saw "Places nearby" while traveling by train on my way home or to work, I still don't understand why.

I was in Japan for two weeks I thought that it would show me some cool stuff there, perhaps even something with my flight or anything at all I would be interested in. Still nothing, Tokyo weather and really random "Places Nearby" which actually never were nearby, and mostly not interesting either.

Given that I gave Google all the data from work, we use Gmail, Google Calender, Google Drive, etc. I'd say this experiment failed and I see no reason to keep giving all the information to Google. I will close down Google Now on my phone (if I can find out how). It seems that Google Now is more about collecting more data about you and doing something for Google with it, not doing something for you with it.

If I did miss something which Google Now can do for me, please tell me.

@jeena Thanks for the post. I don't use Google Now at all. I even tried to not install it, but it's tied to the txt-to-speak engine.