What has Richard Dawkins done wrong?

I'm not saying white people are better, I'm saying that being white is clearly better. ... And I'm a man, how many advantages can a person have?

I've read some stuff during the last days which got me thinking. First, if know the sceptics community online you probably have read about that already, Richard Dawkins who is one of the most famous atheists and sceptics (and a white wealthy old hetrosexual man) told Rebecca Watson who is another famous sceptic and white but a woman, to:

... be a good girl and just shut up about being sexually objectified because it doesn’t bother him.

Go on and read The privilege delusion you will need that to be able to follow my discussion here. Or for you lazy bastards here are the comments the whole thing is about.

Rebecca Watson said as kind of a open letter to a man who she met in the elevator just before:

Um, just a word to wise here, guys, uh, don't do that. You know, I don't really know how else to explain how this makes me incredibly uncomfortable, but I'll just sort of lay it out that I was a single woman, you know, in a foreign country, at 4:00 am, in a hotel elevator, with you, just you, and—don't invite me back to your hotel room right after I finish talking about how it creeps me out and makes me uncomfortable when men sexualize me in that manner.

And Richard Dawkins (and PZ Myers, the owner of the blog where this comment have been posted, confirmed that it was him) commented on that:

Dear Muslima Stop whining, will you. Yes, yes, I know you had your genitals mutilated with a razor blade, and . . . yawn . . . don't tell me yet again, I know you aren't allowed to drive a car, and you can't leave the house without a male relative, and your husband is allowed to beat you, and you'll be stoned to death if you commit adultery. But stop whining, will you. Think of the suffering your poor American sisters have to put up with. Only this week I heard of one, she calls herself Skep"chick", and do you know what happened to her? A man in a hotel elevator invited her back to his room for coffee. I am not exaggerating. He really did. He invited her back to his room for coffee. Of course she said no, and of course he didn't lay a finger on her, but even so . . . And you, Muslima, think you have misogyny to complain about! For goodness sake grow up, or at least grow a thicker skin. Richard

So which fallacies do we see here? First the two which I am paraphrasing because I couldn't find them again after seeing them once somewhere:

And here copy & pasted from the Wikipedia and different other websites on the net, don't think of it as a definite list but more like what I found surfing webpages about fallacies and thought it was related to Richards comment:

I always thought of Richard Dawkins as a bright and literate man who can point out the fallacies in creationists arguments. But it seems like the bible says in Matthew 7:3

Why do you look at the speck of sawdust in your brother's eye and pay no attention to the plank in your own eye?

I sincerely hope that Richard reasons about it and concludes that he should apologize. 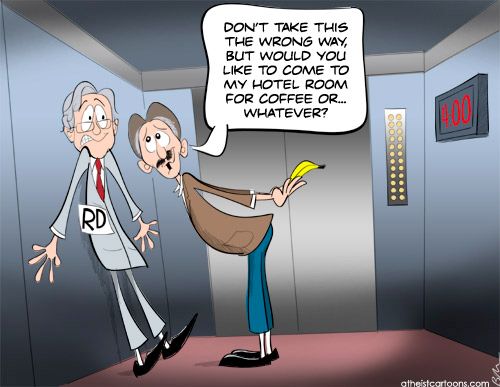