It's time for an explanation

Sometimes I wonder how things work. For example the "Doppler effect". The doppler effect the phenomena you hear when an ambulance drives by and the sound of their horns sounds deeper after it passed by you then before.

I had a look at the Wikipedia and found this animation:

But I really don't think it explains anything and I would like to explain it "the other way around".

Suppose you're on a lake in a small speedboat. In the middle of the lake there is a really big machine which every 5 seconds (this means at a static rate/speed) drops a big stone into the lake.

You drive the boat at a constant speed directly in in the direction to where the machine drops the stones and measure the time between you hit every wave.

Then after you drove by the machine at the middle of the lake you carry on in the same direction and the same speed and measure the time between each wave hits you.

I wrote a little interactive simulation to demonstrate it:

(Sadly you need a browser capable of svg and html5. Or you can watch the video.)

As you can see the rate at that the waves hit the boat is much greater before the center and much lesser after it passed it. And because the tone pitch is just the frequency of a soundwave it is a different tone before the ambulance has driven by you and after that. When you sitt within the ambulance, the tone pitch doesn't change.

Try to change the speed of the (green) boat to see what happens. Per default it has the same speed as a wave.

But to be honest, the ambulance example is probably the most boring example of this effect.

There are plenty of very cool examples, and not only with sound waves but all sorts of waves like radar or light waves. 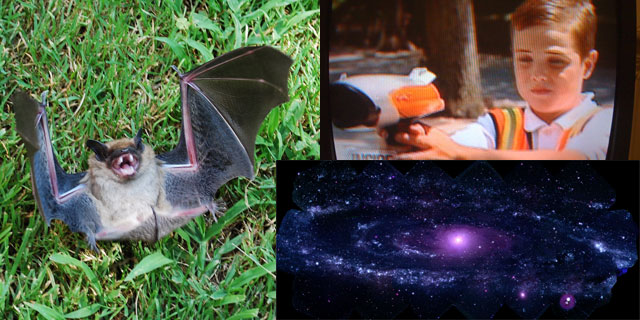 The bat, for example, can sense in which direction the insect is moving based on the pitch of the echo. If the insect is moving away from the bat, the returning echo will have a lower pitch than the original sound, while the echo from an insect moving toward the bat will have a higher pitch. The bat of course uses sound waves and this is also called sonar. They are so specialized to calculate where their pray is that they "see" it, even when they are flying and moving on their own.

Have you ever been stopped by the police who drove behind you for some time and they said that you were speeding? Then they also have used the Doppler effect in exactly the same way the bat did but not with sound waves but with electromagnetic waves and their radar instead.

Or have you ever wandered how the scientists found out that the universe is expanding? They too used the doppler effect; Not with sound waves or electromagnetic waves but with light waves. Depending on which frequency the light wave has it appears as a different color in our brain. But the Doppler effect does work on all kinds of waves, therefore on light too.

Because light always travels with the same speed (speed of light) it should have exactly the same wave length independently of where from it comes. But if you measure the wavelength you can see that light from all other galaxies shifted to red, which means the waves are longer and therefore the source of the light is moving away from us (like the center of the sea on the boat on the second half of your journey). (More info)