Can not decide between beer and wine

You all know that I am homebrewing beer and stuff.

The day before yesterday me and a friend, David, picked Sambucus nigra (or black elder) flowers, mixed them up with sugar water, some lemon and a little bit vinegar. With help of the natural yeast on the flowers we got it to turn the sugar water into "Elder Champagne". Tomorrow we will put everything into bottles but already today it had a really rich elder flavour. Then after three or four weeks it's ready to drink.

Today on my way to the beach I found many of these everywhere in my hometown Varberg: 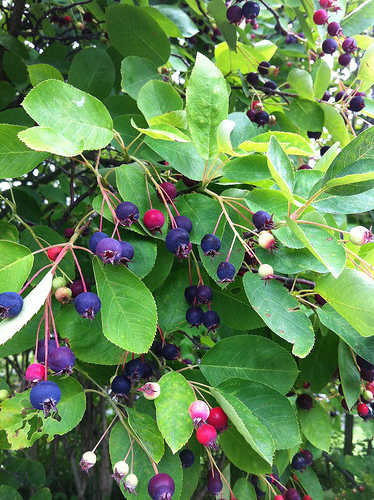 But I didn't know what these were and not what the'd be called in any of the languages I understand. Even so I began to pick them into a jar I had with me when an older woman came by and we small talked. She advised me not to eat the berries because even she didn't know what kind of berries they were. But when I told her that I already tasted one and it tasted nice and sweet she picked one and was on the way to test it herself; But just before the berry could enter her mouth she threw it away and said: "Ush, I do not dare.". I said "I will kill the poison with alcohol.", she laughed and was on her way.

So I turned to my Twitter followers and Facebook friends, and after just half an hour I got the answer from Daniel, they're called Amelanchier alnifolia or juneberries.

The Wikipedia article says that the fruits are not poisonous, just the leaves give you diarrhoea, so I picked 2 liters of them and will try to make either beer or wine.

[update:] I just pressed them and it became a oily mass: 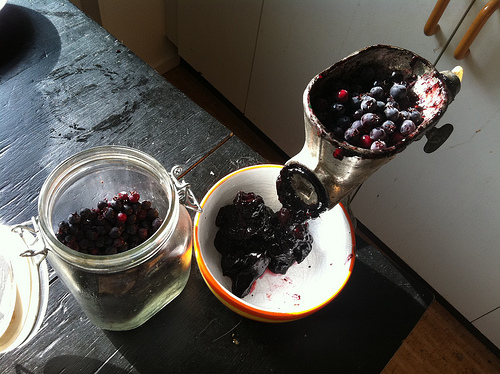